Time to be Real

This has been one of those weeks! You know, those kind. The ones where you throw everything to the wind and just go forward one step at a time. We’ve hardly eaten any dinners I had planned on my menu for this week, my kids have watched too much TV, I’ve bought fast food one too many times, and I have laundry and unfinished projects scattered around me. Not exactly what I had planned. I would have rather said, “We ate from home for every meal, I stayed caught up on all my chores, we never turned the TV on, we’ve been homeschooling every day with extra Thanksgiving projects thrown in, and I rescued a stray dog!” Yeah, nope. But, that’s life and I’m ok with it.

I didn’t do anything for Kitchen Tuesday today either, but mainly because we ventured out for a playdate this morning. And the kids had fun so it was worth it 🙂 All I have done is pull out the homemade pizza dough from the freezer (yay for freezing food for later!) and mixed up a jar of iced fruit water. I cut up an apple, a pear, and some lemon and threw it together in hopes that my kids will be excited about a ‘new’ kind of water. They drink water really well already, but there are times when they start asking for juice so I’m hoping this will help! I found the idea on pinterest, of course.

And to stay updated, here is the progress on the chicken coop! 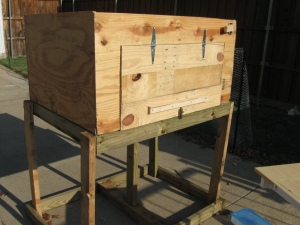 Hubby has been working so hard for me!! Hopefully it will only take another day of work before its finished, minus the painting. That will be MY part.

And here is the new project I acquired in the last week. 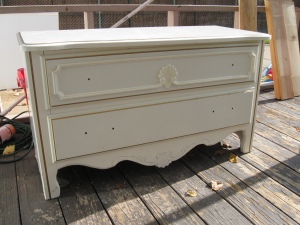 Its a TRUNK! And I scored it at my thrift shop for $10! I’m hoping to get it sanded before the end of the weekend and then get some paint and new hardware for the front.

So, even with things not going as planned, they’re still going. And I have faces like this to look at everyday. *sigh*

And now I’m off to tackle the laundry that’s staring me down.

This entry was posted in Homesteading Adventures, Kitchen Tuesdays, Recipes, This and That. Bookmark the permalink.

One response to “Time to be Real”